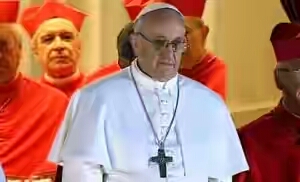 If you remember some time ago in 2013 when the Pope declared concerning gays that: “Who am I to judge?”. This has therefore encouraged some reverend Sisters in the Catholic Church to be married as they profess to be lesbians.

On the 28th of September, the nuns who were missionaries (Sister Federica who is 44-year-old and Sister Isabel who is 40-year-old) got married in a civil ceremony in Pinerolo in Italy having gotten engrossed in their love affair.

The Vatican’s deputy secretary of state Archbishop Angelo Becciu, on his twitter page said: “How much sadness on the Pope’s face when I read him the news of the two married ‘nuns’!”

Chai! Why will the Pope be sad after making such a declaration. We know the Bible says in Romans 1:26 For this cause God gave them up unto vile affections: for even their women did change the natural use into that which is against nature: vs28 And even as they did not like to retain God in their knowledge, God gave them over to a reprobate mind, to do those things which are not convenient; vs32 Who knowing the judgment of God, that they which commit such things are worthy of death, not only do the same, but have pleasure in them that do them.

The Bible is our Standard!
God save us o and help your church.